New report to the Nation on the Status of Cancer 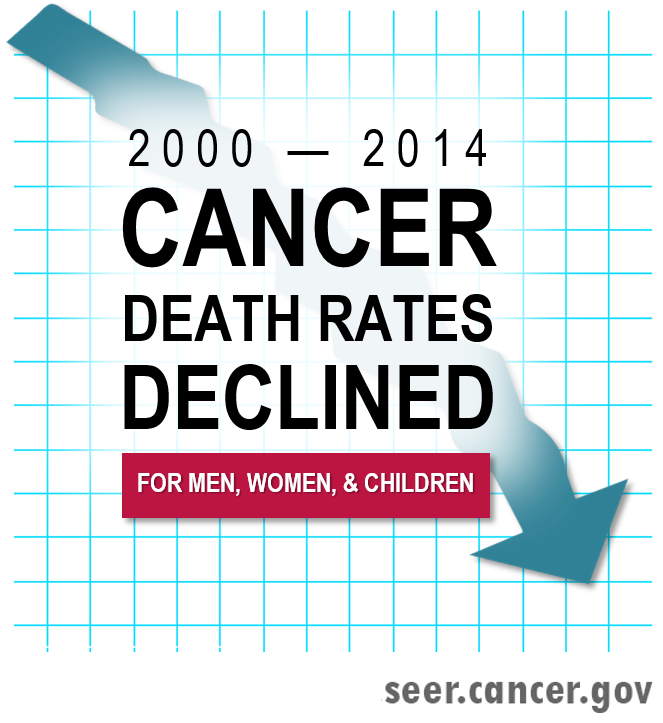 “Cancer death rates continue to decline” states the welcoming news from the latest Annual Report to the Nation on the Status of Cancer.

The report is released each year in a collaborative effort by a number of leading medical organisations: the American Cancer Society; the Centers for Disease Control and Prevention (CDC) and the National Cancer Institute (NCI); and the North American Association of Central Cancer Registries (NAACCR).

The report shows the common cancer types where death rates have declined include breast, colorectal, lung and prostate, while overall cancer rates have decreased among men and stabilised among women.

While declining death rates are definitely a reason to be positive, the team behind this latest report have warned that it’s just as important to track survival rates.

Included in this year’s report, for the first time since 2004, is a special section dedicated to cancer survival rates. It shows the good news that survival rates have improved for most types of cancers at varying stages of diagnosis. The five-year survival rate for cancers diagnosed has increased significantly in all but two types of cancer: cervical and uterus, with the greatest increase in survival rates (25% or more) being seen in prostate cancer, kidney cancer, leukaemia, non-Hodgkin lymphoma and myeloma,

However, racial disparities still remain for some types of cancer, which has led the authors of the report to remind us that the battle to beat this disease must continue.
“We still have a lot of work to do to understand the causes of these differences,” said Lynne T. Penberthy, M.D., M.P.H., associate director of NCI’s Surveillance Research Program, “but certainly differences in the kinds and timing of recommended treatments are likely to play a role.”

The report also looked into which risk factors can impact cancer survival rates, with obesity being raised as one key influence and another being tobacco. It also states more needs to be done to identify other major risk factors for common cancers and recognising and understanding increasing incidence trends.

In addition, the study noted that continuing education around early warning signs, self-checking and cancer screening was essential to ensuring that death rates continue to decline.

“This report…should compel us to renew our commitment to efforts to discover new strategies for prevention, early detection, and treatment,” concluded Betsy A. Kohler, executive director of NAACCR, “and to apply proven interventions broadly and equitably.”

For more detailed information about this report please click here.